The present activity is aimed at the characterization of SMA wires, made of Nitinol, by thermo-mechanical tests in order to derive the constitutive models parameters and, consequently, to perform FEM analyses of SMA-actuated devices based on the wires. The activity is organized in the following three steps: (i) definition of test workflow (ii) specimen mounting and testing (iii) post-processing.

The variables we can control are the elongation, the load and the temperature. For each phenomenon to be caught, a specific flowchart is set; in figure 1, the test workflows to catch pseudo-elastic effect (Fig.1(a)) and thermal hysteresis phenomena (Fig.1(b)) are illustrated.

The thermal chamber is located under the crosshead, the specimen is locked to the grippers of the electromechanical testing machine (Fig. 2) and the test is performed. 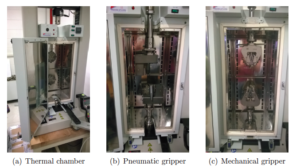 3. Post-processing and computation of material parameters

Output data (crosshead displacement, load and temperature) get expressed in terms of stress and strain; from the resulting curves, models parameters are computed and compared to the experimental data, as reported in figure 3.